Surprising Map Of What Each State Buys The Most 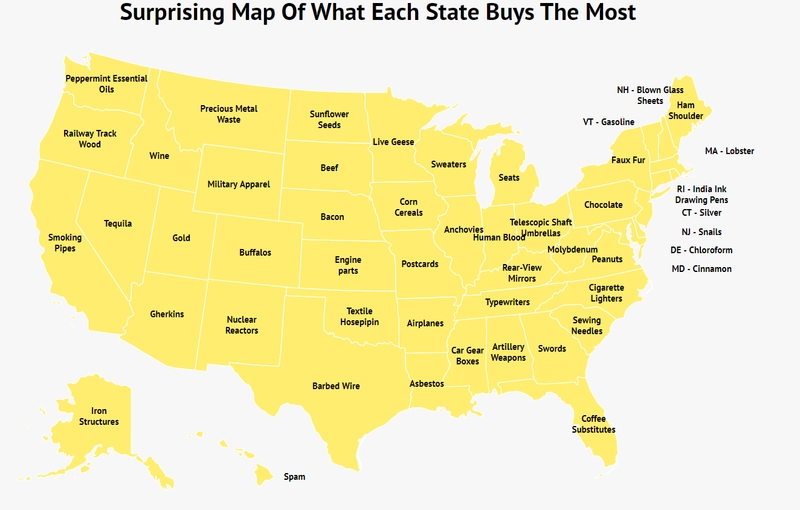 I mean, we’re talking anything from typewriters and faux fur to human blood and asbestos. Seriously, though.

Typewriters are a thing in the past.

Human blood? Do we have a hoard of vampires somewhere?

And don’t even get me started on asbestos.

While we’re sure the people in these states all have good reasons for purchasing these items, it’s definitely fun to speculate about how the items are used.

By looking into each state’s product imports per capita, we found some fun, interesting products so keep reading to find out which state is wasting their money buying typewriters and which state is going to release vampires on the world.

We probably could all agree that everyone could spend their money in better ways. But nonetheless, at least these products give us something fun to write about.

We set out to find what people in each state buys more of than others. This article and data is not for what each state buys the most of (because who wants to look at a map that says petroleum and machine parts over and over?), just what they buy a disproportionately large amount of.

Because we like to laugh, we set out to find some silly products and fun factoids. After all, the world needs to know that Illinois loves Anchovies, so we can be sure to never share a pizza with them.

To identify these products, we used combination of the US Trade Census and FlexPort.

From there, we looked at product imports per capita, to determine the overall dollars being spent. Since some states may buy or produce these products in state, it may not reflect total purchases. However, it’s a pretty good look.

Summary of What Each State Spends its Money on

Now that you’re aware of these weird purchases, we hope you don’t look at these states differently. Although, we wouldn’t blame you. We’ve included a full table for every state so you can see what every state spends its money on.