Each state’s favorite tv show (Hint for many states, It’ll Always be there for you…) 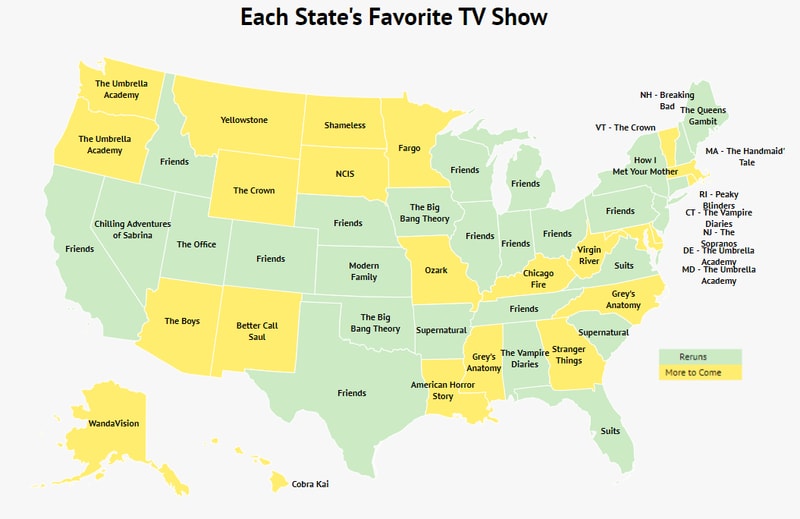 Growing up, my family’s schedule was crazy busy. But every day at 5 p.m. we would all sit down for dinner in front of the TV to watch Seinfield on TBS.

Now, with all the streaming services, no one even knows what it means to wait all day to be able to watch a show. We even get to pick which episode we watch now.

With the entire world of TV at the click of a button, we wondered what everyone was choosing to watch. The answers may surprise you.

Shows that Kept Our Attention

We looked at the top 100 most, highly ranked TV shows from IMDB, the internet database of all things movies. We culled out some shows that were mini-series but otherwise bowed to the people’s wisdom.

From there we referenced Google Trends data from the past twelve months and came up with the most statistically significant, unique TV program in each state. For example, How I Met Your Mother is not the most-watched show in New York, but it is watched there more than in any other state.

In general, this method tends to favor new tv shows, particularly those with cliffhangers and other probing questions. So we can’t guarantee that everyone isn’t just happily watching The Office- no questions needed, just the play button.

Get Your Binge On

There you have it. All of the shows the U.S. has deemed worthy of being binge-watched. That’s really saying something.

If nothing else, at least this list has given you a list of shows that you need to watch. Hopefully, there’s at least one or two you haven’t seen yet.

And our research proved that Disney was able to accomplish something the other streaming services have yet to do.

Make a show worthy of watching as new episodes are released, rather than binge-watching all of the episodes once they’ve all been released. Check out the list below to figure out what you need to watch next.