So, to understand exactly how much student loans are effecting not only Americans, but also the U.S. economy as a whole, here are some insights our research uncovered:

For further analysis, we broke down the data in the following ways:
Key Findings | Total | Average | State | Demographics | Hardships And Repayment | Impact On Career And Life Choices 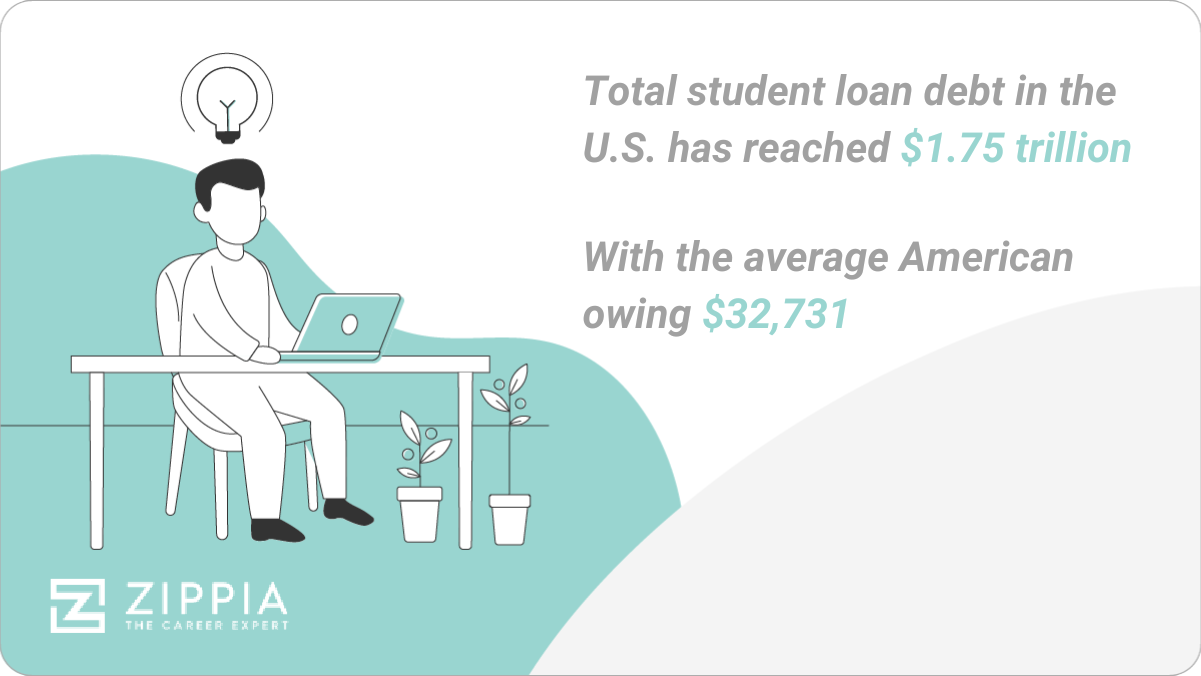 92% of student loans, according to a June 2020 report by MeasureOne, are through the federal government. Unfortunately, this means 8% of loans are through private lenders. Private lenders often have higher interest and these loans are not eligible for income-based repayment or federal loan forgiveness.

Sixty-two percent of the class of 2019 graduated with student debt, according to the most recent data available from The Institute for College Access Success. Among these graduates, the average student loan debt was $28,950.

Students who pursue post-college education can expect to rack up even more debt. According to the Urban Institute, 48% of student debt is held by households with graduate or other professional degrees.

You can see a more in-depth breakdown of student loan debt by state below. 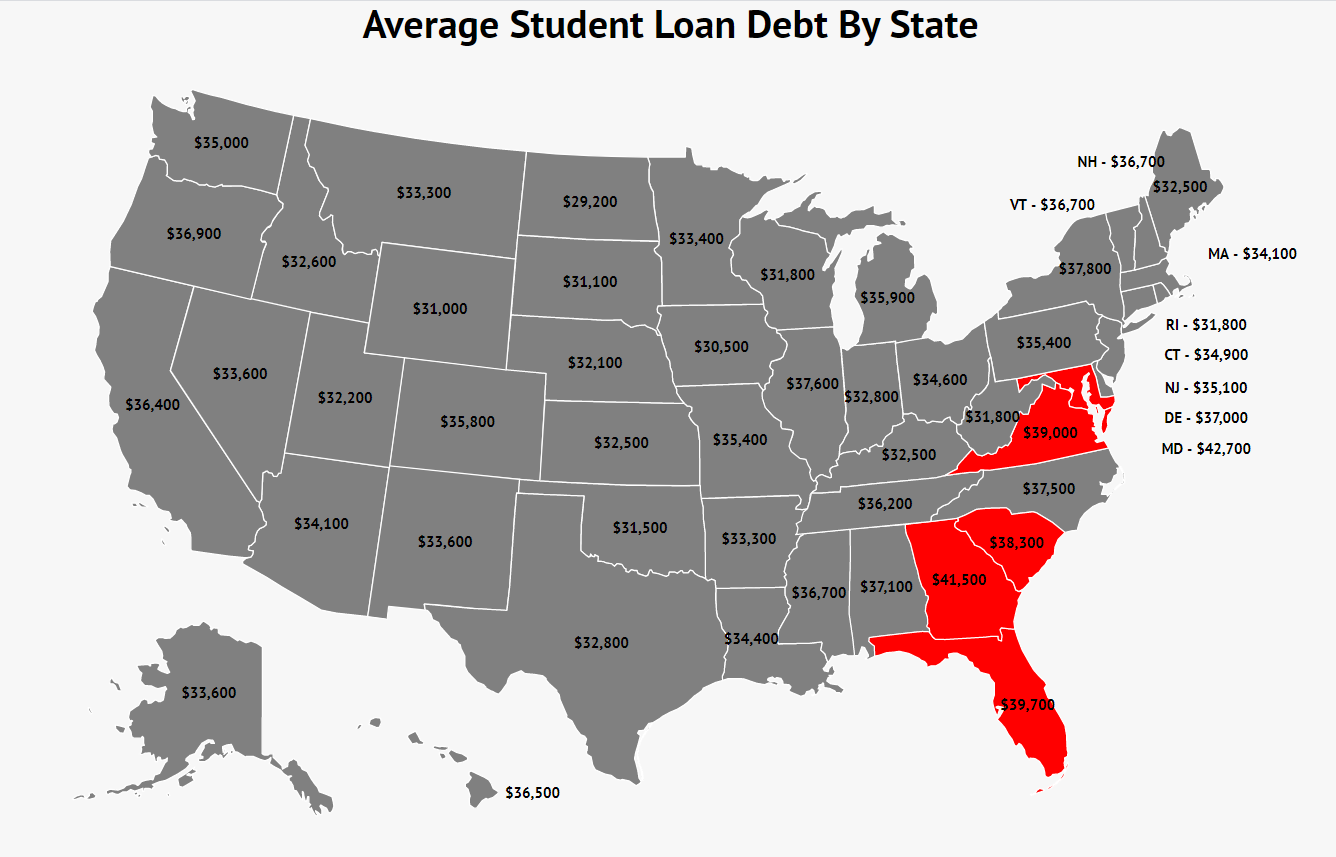 Student loans are not evenly distributed across the country. Students in some states are burdened with more student loans than others.

In particular, DC students have higher loans than the rest of the country, with an average $55,400 in student loan debt. North Dakota residents have the least amount of student loans on at “only” $29,200.

35 to 49 year olds owe the biggest amount of student loans in sheer volume at 601 billion spread across 14 million borrowers. This averages out to about $42,373.23 in loans per borrower. 25 to 34 year olds have a similar number of borrowers, but less average debt. Perhaps they (and the those under 24) are still accumulating student loan debt.

In general, students coming from families with less income are more likely to carry student loan debt. Those who come from more advantaged backgrounds have higher chances of entering the workforce unburdened by student debt and more open to available to explore opportunities.

However, a majority of students from all households still carry debt upon graduation.

Interestingly, while students from higher earning families are less likely to have loans, those that do carry more debt. Higher income households spend more on education- even when that means student loans.

Shockingly, 62% of seniors graduating in 2019 still had student loan debt.

With an average student loan amount just under $30,000, that is the equivalent of a healthy nonpayment on a home, a brand new Audi, and a year of median individual income in many small, rural towns. Unsurprisingly, not all students are able to pay back their debts.

The U.S. Department of Education reports about 20 percent of borrowers are in default, having gone at least 270 days without a payment. More than one million loans go into default each year.

Who is most likely to default on student loans?

See: How much in student loans can I afford?

In addition to causing personal financial hardships, student loans impact the job market and cause holders to delay traditional life milestones. From working multiple jobs to working less than desirable jobs unrelated to their degree, many job seekers feel the pressure to pay off their mountain of student debt.

Therefore, to better understand how student loans are influencing career choices, we surveyed 500 workers with student debt. You can read a more in depth breakdown of our findings and methodology below: 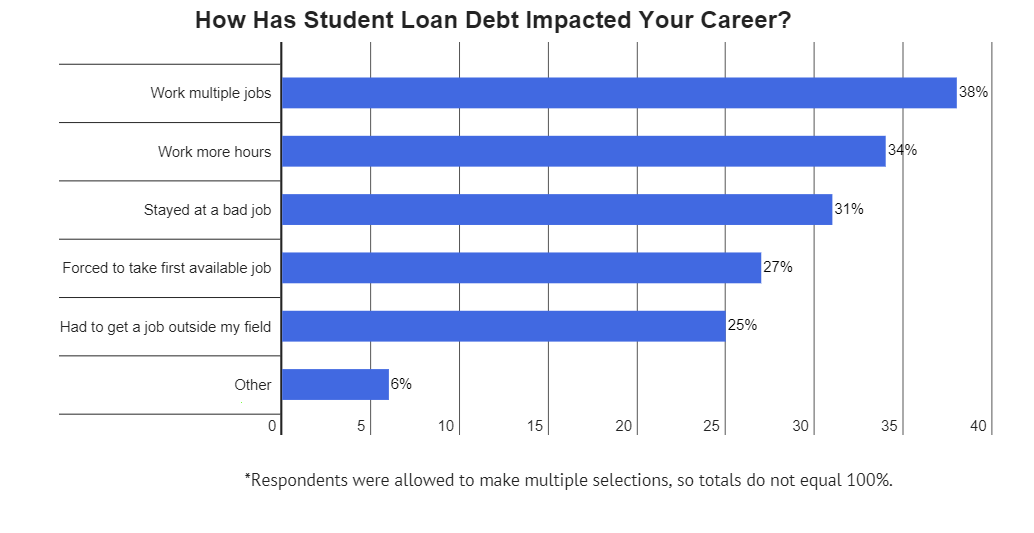 Above you can see respondents answers to the question, “How have student loans ever impacted your career choices? (Choose all that apply).”

Nearly 38% have at some point in their career worked multiple jobs to help chip away at their student loans. Similarly, 34% have worked more hours due to their debt, and 25% have now work outside the field they went into debt to enter.

Ultimately, it is easy to see that no small number of workers with student loans find their choices limited by debt.

However, careers are not the only important life event impacted. Many struggle to accomplish other life milestones due to the financial burden of their student debt. Below we highlight the percent of respondents by debt level and their responses to a series of questions.

Signing up for more debt when you struggle to pay your current debt is unsurprisingly a strong deterrent. According to our survey, 1-in-2 workers with student debt have delayed or decided against further education due to student debt.

However, in some fields higher education is necessary to advance or obtain higher salaries. While students may be making astute assessments of how much debt they can afford, others may simply not be in a place to make a pricy investment in their future earnings.

Impact Of Student Debt On Homeownership

Homeownership may be a staple of the American dream, but it comes with a price tag. Not only does a high monthly loan make it difficult to save for a down payment, but high debt can also make getting approved for a home loan impossible.

Impact Of Student Debt On Marriage

However, there are other implications for marriage with high debt, so we cannot say for sure if savvy tax choices are altering couples’ marriage plans.

Impact Of Student Debt On Parenthood

The birthrate is down in America. While student loans probably can’t bear the full responsibility, it is clear that a significant amount of our respondents have at least delayed parenthood due to student debt.

Impact Of Student Debt On Saving For Retirement

Retirement savings is another area where student loans can impact savings’ choices.

In addition to the above issues, we allowed respondents the opportunity to explain how student loans impact them. Below you can see a list of commonly cited issues not represented above.

Student Loans Can Open Doors, But Close Some

Ultimately, student loans are needed for many students to complete higher education and obtain the career they want. The job market is much often kinder and has more options for those with a college degree.

However, excessive student loans can also lead many workers to have less options due to the burden of paying them back. Career choices can be limited- with job seekers not being in a position to hold out for a better job or negotiate strongly for higher pay.

Overall, while student loans can impact the job market, they also bleed into other life milestones. As one respondent put it, “I might never be a parent because of my student loans. I also can’t purchase a house. I feel stuck in a bad marriage due to not being able to afford living alone.”