The States That Grow The Most Pumpkins & Fun Facts 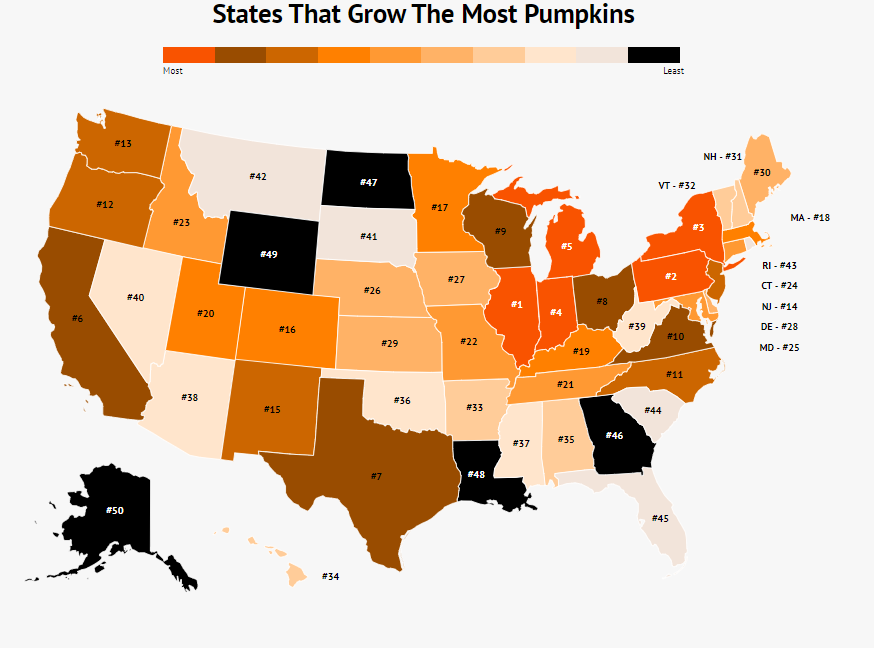 Americans spend big every year on fall festivities, from costumes to candy to other spooky trappings. And who can forget the star of fall, the pumpkin? Almost 1-in-2 Americans will carve a Jack O’Lantern this year (with more digging into a delicious pumpkin pie or sipping on a Pumpkin spice latte.)

For many Americans, pumpkins are not just a seasonal treat, but a way of life and how they make a living. Over 1.5 billion pounds of pumpkin are produced in the US, on over 15,214 farms.

With those whopping numbers, we set out to find the states who grow the most pumpkins and other fun, festive facts.

10 States That Grow The Most Pumpkins

To find the number of acres and farms used for pumpkin production, we turned to the 2017 U.S. Census of Agriculture. Sadly, data was not available yet for beyond 2017. From there we ranked each state based on its pumpkin acerage to determine where is growing the most pumpkins (and seeing the boon of all those pumpkin bucks.)

From there, we looked to sources such as Nielsen Retail Measurement Services, Finder, and others for the fun facts throughout the article.

Pumpkins Own The Season

Sure, other produce might try and steal pumpkins’ thunder (cough, apples, cough.) However, we all know pumpkins are the pinnacle of fall.

You might bob for apples (gross-wouldn’t recommend), or drink some apple cider, but can you carve a spooky ghost face in one? Are 80% of them picked in October? I think not.

So sit back, pop open a pumpkin beer and accept pumpkins’ dominance. If that’s not enough, try a pumpkin doughnut, cookie, cake, cereal, or anything other product that is pumpkined up. Still don’t believe me? Just ask Illinois, or the other states that grow the whopping 1.5 billion pounds of pumpkin we demand.

The Most Pumpkin Growing State