Understanding Your Team: Who’s Who in Your Hundred Acre Wood

I remember when I first independently read A.A. Milne’s stories about Christopher Robin and his friends in Hundred Acre Wood – Winnie the Pooh, Piglet, Tigger, Eeyore, Owl, Kanga, Rabbit and Roo – I couldn’t help but think how each character reminded me of someone I knew – a grandparent, an aunt, a neighbour, a teacher, a sibling, a friend.  Looking back, I think that was the beginning of my fascination with personality styles and how they influence how we react to stimuli and how we orient ourselves to the world around us.  Who would have thought that many years later I would write a personality-based team building program around Milne’s beloved characters!

I wasn’t the only one who saw similarities between Milne’s characters and the people in my life.  Psychology researchers have often drawn comparisons between Christopher Robin’s friends, common mental disorders and various personality styles, particularly the widely used Myers Briggs Type Indicator (MBTI) and the Big Five Personality Traits.

Your Hundred Acre Wood can be anywhere – the family home, the local village, the workplace.  Christopher, Pooh, Tigger, Piglet, Owl, Eeyore, Kanga, Rabbit and Roo are in every office everywhere, and when you get to know them you can more effectively motivate and manage them.

So, how do you tell who is who in your Hundred Acre Wood?
Key Takeaways: 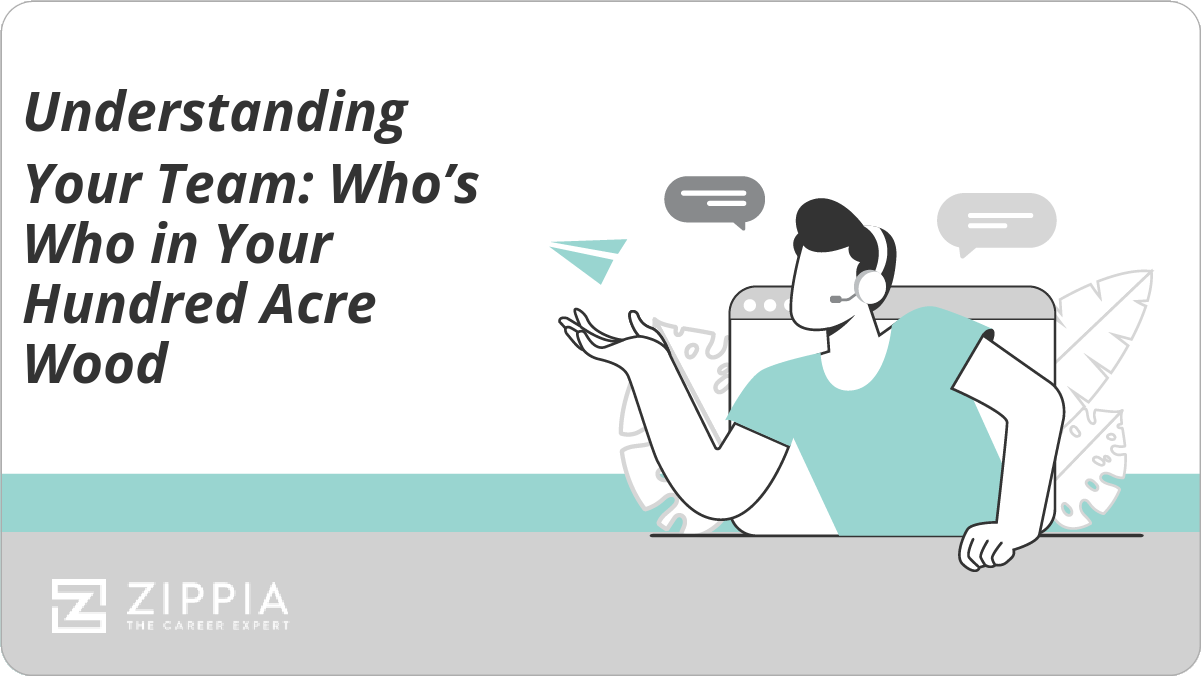 Winnie-the-Pooh, or Pooh for short, seems at first a bit naïve and slow-witted, but he is a friendly, thoughtful and sometimes insightful character who is always willing to help his friends and try his best.  He is completely open, upbeat and cheerful, yet blissfully unaware of consequences.  What he lacks in common sense, he makes up for in spirit, and the others also find comfort in Pooh’s simple yet lovable pursuit of happiness.

In the office, Pooh will often seek advice and leadership from others.  He may need to have things explained to him a couple of times and he will respond well to clear direction and “how to” instruction.  He’s not naturally a lateral thinker and is unlikely to demonstrate lots of initiative.  Pooh is likely to need more displays of comfort and support from his co-workers than others.  But he is an honest, open, reliable and generous team member.

To best motivate Pooh, get him involved in activities that will have him working as part of a team.  He does not really enjoy autonomy and you might find he gets a bit anxious about having too much responsibility.

Christopher has a cheerful and compassionate personality and is someone that Pooh and the others look up to. He is much wiser and more mature than many of the other characters. He displays intelligence, literacy, cleverness, helpfulness, modesty, humor, compassion, diplomacy, sensitivity, courage, physical and organisational competence. One of Christopher’s best traits is his willingness to admit to his limitations and seek the input of the others to solve problems.

In the office, Christopher is likely to be in a leadership role and if he’s not, you should think about putting him in one!  He is able to inspire and motivate others, encourage collaborative problem solving and calmly get things done.  He understands that everyone has something to offer if they are given the opportunity.

Piglet is quietly intelligent but is timid and often takes his lead from others unless overcome by fear, when he will suffer from “stage fright” and find a place to hide. He is kind, gentle, and quite shy, but he sees himself as small and helpless in a big world and is reliant on the security and comfort of others. He is very agreeable, which can be a problem in times of conflict or when a clear decision needs to be made because you cannot just agree with everyone’s point of view – at some point you need to stand on your own two feet. But increasingly he shows himself to be very brave when faced with a crisis, given sufficient encouragement (usually by Pooh).

To motivate and manage the Piglets in your office, buddy them up with other more confident team members and give them projects that will enable them to boost their confidence.  Encourage them to have a voice at meetings, even if in a small way at first.  And Piglets really need you to praise in public and counsel in private.

Eeyore is glum, sarcastic and pessimistic and has trouble getting himself organised. When he does try to do something it usually is a half-hearted attempt.  He is slow-talking and more cautious than some of the others and is often reluctant to go along with their actions, but usually does not bother trying to oppose anyone because he believes it to be futile to try. Eeyore very much falls into the Neuroticism personality profile – he feels like he really understands everyone else, but he feels isolated because nobody seems to understand him. Because of this, he concludes that he is unimportant, and therefore he feels there is no point to anything he does. And because he feels it is fitting that he feels the way he does, no amount of help from his friends will cheer him up, because he chooses to feel the way he does.

In the office you can be absolutely certain that your Eeyores will find all the reasons why something won’t work and they often feel discriminated against by the slightest things.  They won’t volunteer for new projects because they feel they wouldn’t be welcome and don’t speak up in meetings because they assume their contribution will be steam-rolled.  They are the ones who will say “What’s the point?”  Eeyores can be very frustrating team members!

To motivate Eeyores, allow them to voice their concerns and acknowledge them but then gently explain why you are taking a different approach and the benefits of doing so.  Keep them away from other Eeyores if you can – negativity and pessimism are contagious!

Kanga is the only female of the group and the only mother.  At first everyone thinks she is a fierce animal but soon discover this to be untrue. Kanga has a great sense of humour, is kind-hearted, calm, patient and very concerned for the well-being of others. She likes to keep things clean and organized, is a good multi-tasker, and offers motherly advice to anyone who asks her. She seems to be in control of her life and comfortable with her responsibilities.

In the office, Kanga is the nurturer of the team – she is the one who will seek to create peace and harmony and the one who will remember everyone’s birthdays and organise the cake for morning tea.  She holds to an “open door” policy and will also be quick to support anyone who she feels is struggling with something – including often helping people complete their tasks.  But sometimes, she does this at the expense of herself.

Kanga doesn’t need a lot of motivating but you might want to ensure that she doesn’t overload herself by saying “Yes” too often.  If Kanga breaks down, the rest of the team will become anxious and concerned at the expense of your productivity.

Roo is Kanga’s cheerful, playful and energetic joey and the youngest in the group.  He looks up to Tigger like an older brother. Little Roo’s mind is a sponge. He is always asking questions and trying to understand the world around him but needs to analyze data to better understand the world around it. You might say that Roo requires context if he is going to be able to get his head around things.  Unfortunately Roo doesn’t question what he learns, and therefore tends to readily believe anything he is told.

In the office Roo is the new entry level recruit.  A solid induction program followed up with relevant, well structured training and coaching will ensure you get the best out of Roo!

Rabbit is friendly, reliable, dependable, and organised but can become very irritable. Rabbit fancies himself the smartest animal in the Hundred Acre Wood and is constantly scheming, making plans, and tirelessly looking into practical ways of improving things.  But he has a dark side – he insists on doing things his way and is obsessed with rules, planning and order. He often loses his temper with others and bosses them around, but deep down, he cares a lot about his friends. Rabbit hates it when anyone messes up his work or his space and having fun is a foreign concept to him.

Rabbits are more comfortable in positions of management rather than leadership.  While their conscientousness is a much lauded trait in the office, Rabbits can be a bit uncompromising and uptight.  This sometimes causes problems with others who respond better to a lighter, more flexible workplace.

To motivate Rabbits, put them in positions or give them projects that require structure and an efficient, pragmatic approach.  Rabbits respond well when they know something has been done correctly.  But be sure to help them develop their leadership skills so as not to alienate team members.

Tigger is the quintessential extrovert – full of energy, fun-loving but sometimes so overconfident that he thinks that any task is “what tiggers do best”.  Adventurous, Rambunctious, always on the lookout for new experiences and adventure, he is not concerned with understanding the world, only with having a good time, filled with plenty of new experiences. Unfortunately, he is sometimes so focused on the present, that he never learns from the past, and is blind to potential disaster, and will often get anyone who follows him on these adventures into a bind. He certainly brings excitement to the Hundred Acre Wood!  Having said all that, Tigger is also resilient, fearless, optimistic and resourceful.

You will find lots of Tiggers in sales and entrepreneurial enterprises.  They bring enormous energy and a great sense of fun to your team and are adept at motivating others.  But in the office, your biggest challenge is to keep them focussed, conscious of deadlines and mindful of the details of what they are working on.  Tiggers perform well under pressure and are not easily deterred from a challenge so don’t be afraid to set them ambitious targets.

Tigger are so self-motivated, you don’t need to do anything much at all!

Owl is the oldest member of the group and presents himself as a mentor and teacher to the others. Owl and most of his friends believe that he is the most intelligent animal in the wood, because he pulls facts and figures out of seemingly thin air, and is often right.  But he rarely  checks to see if his conclusions are actually true, because he just KNOWS how to appear credible.  He often rambles on into long-winded speeches and uses words that his friends do not understand. Read jargon!  Though Owl likes to present himself as very knowledgeable, he is of average intelligence.  But rather than admit this, he anxiously bluffs his way through things, sometimes tricking others to make him look good. He can be cross and easily annoyed, especially when his friends ignore or interrupt his long-winded speeches.

In the office, we often find Owls promoted beyond their competence because they are so effective at promoting themselves.  But they can become a bit of a nuisance when they feel the need to advise everyone all the time.  On the other hand, their desire to be across everything that’s happening can be a huge bonus when building intellectual capital.

You don’t really have to consciously motivate Owls because they feel so indispensable to the organisation that they front up voluntarily!

So, now to understand how your team works, you can look at your team members through the lens of Winnie the Pooh characters, working together to solve a problem or understand the world. In summary:

The most successful teams will have a bit of everyone in them.