These Are The 10 Companies With The Biggest Fines Of 2018 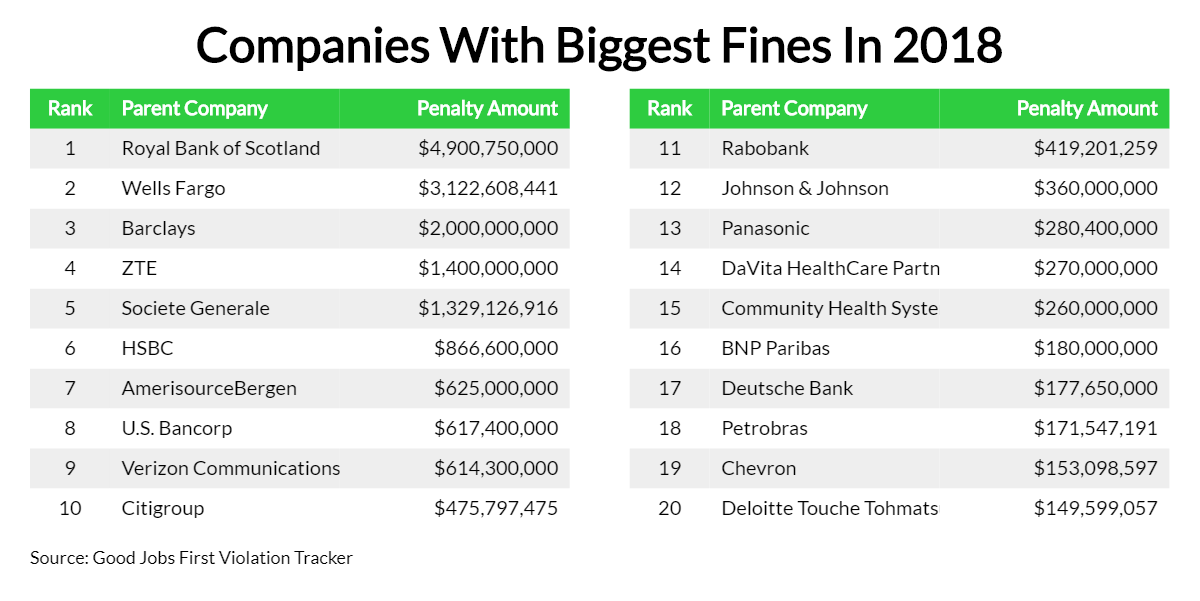 When someone asks what you think of as a corrupt, illegal, or consumer unfriendly company, these kinds of companies spring to mind. And while being the target of a hit is probably a lot worse than having to deal with a manager’s manager’s manager at a big insurance company, I’d say there’s a minimal difference.

So we took it upon ourselves to identify which companies and industries go out of their way to cause all of us the most pain and suffering (outside of dentists which we technically pay for the pleasure of going to). Specifically, those companies that had to pay the most in fines during 2018.

To do so we looked at the most recent data from Good Jobs First Violation Tracker. They have a pretty straightforward description of their project and sources of data:

We pulled the data for all of 2018 and aggregated “Penalty Amount” to the parent company level in order to identify the companies that paid the most in fines:

You can find a detailed breakdown by industry, agency, and company below.

* Data on industries only available for about 15% of firms

We used data from Good Jobs First Violation Tracker for all of 2018.

We then aggregated “Penalty Amount” by the parent company or, if no parent company was present, the company name for every company in the data set — 12,477.

Finally, we did the same procedure by “Major Industry of Parent” when the data was available (about 15% of companies had this field) and for government “Agency”, which was available for about 99%+ of penalties.

Below is a further breakdown by industry, agency, and the top 100 companies.

Industries With The Largest $ Amount Of Fines In 2018

Agencies With Largest $ Amount Of Fines In 2018

100 Companies With The Largest Amount Of Fines In 2018