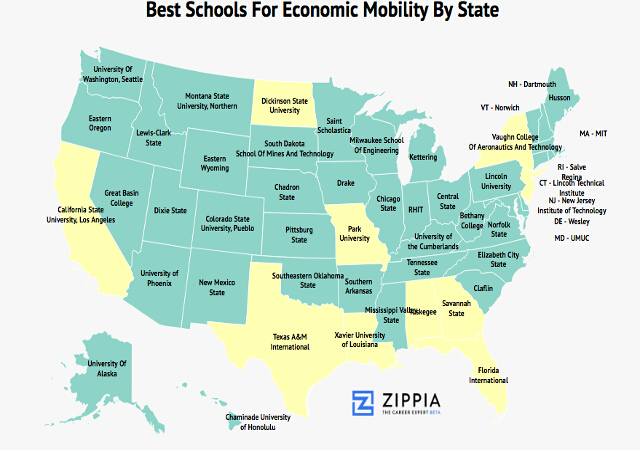 These Are The Best Colleges For Economic Mobility By State

A college education has long been ingrained in our psyches not just as key, but the key to economic mobility. And for many parents, one of the first things they do to get adulting is open up a college fund, hoping this will give their kids the whole American Dream thing — and we’ve got a list of the best schools for catapulting students into the wealthiest brackets.

We at Zippia have put together a list of the top schools by state in terms of which ones have the largest percentage of students who enter in a low income bracket and wind up in the top — and our study is different from others, because we don’t just want the top, we want the top one percent as well.

Here’s the best of the best… and it’s also really exciting to me that Drake University made it to this ranking of schools that has the most students that started from the bottom, and now they here.

In a time where each generation starting the the 1940s has almost universally made less than the previous one, one of the critical things to today’s college freshmen is that the college they choose will launch them into a higher economic bracket.

And as this study shows, 60 percent of incoming freshmen indicated it as “very important” that a college’s alumni are “very well off financially”.

And Vaughn College does just that.

How We Determined the Best Schools for Economic Mobility

Because we primarily care about the economic mobility of the students in each school, our main focus for the rankings came in the form data from the Equality of Opportunity project, which we used to plot:

We also used the College Scorecard database to find out what they were earning six and ten year after they graduated — but this didn’t get as much weight in the rankings, since it’s all about mobility.

We eliminated community colleges and schools from our rankings that had fewer than 200 students per entering cohort, since this is about mobility. It felt like showcasing super-selective schools or schools that served a very small part of the population wouldn’t represent that ideal very well.

A word on NY

And as a reminder, each college on our list has to take the top place in its state to make the rankings. For example, New York actually has the top four schools in the country for economic mobility:

But since they’re second, third, and fourth place in the state of New York as well as the country, they don’t make the map. Still, shout out to CUNY, for the people.

College: Vaughn College Of Aeronautics And Technology
Became a One-Percenter: 0.6 percent
Started from the bottom now they’re here: 16.4 percent
Median individual earnings around 30: $53,000
Coming in at the top of the national list — as well as the competitive enough top of New York list — is this fight-focused college with a student body with a 90 percent financial aid rate that is more than 68 percent minority. First class flight to the tippy top.

College: New Jersey Institute of Technology
Became a One-Percenter: 0.1 percent
Started from the bottom now they’re here: 6.5 percent
Median individual earnings around 30: $71,600
This school is a bit of a standout on our list, since it’s got a limited selection of majors that are almost predominately tech=based — but it also has the highest median salary, so there you have it. This high value-added school is clearly successful at producing successful people.

College: Xavier University of Louisiana
Became a One-Percenter: 0.4 percent
Started from the bottom now they’re here: 5.3 percent
Median individual earnings around 30: $48,400
Xavier students clearly have high aspirations and an uncanny ability to ignore the year-round party that New Orleans offers — and unlike schools on this list, Xavier’s students aren’t coming from homes that are progressively earning more over the years.

College: Florida International University
Became a One-Percenter: 0.1 percent
Started from the bottom now they’re here: 5.2 percent
Median individual earnings around 30: $46,800
The fact that this school manages to have such a high economic turnaround for its students is truly remarkable, considering that it’s not only the largest school on our list but the fourth-largest in the United States by enrollment.

College: Tuskegee University
Became a One-Percenter: 0 percent
Started from the bottom now they’re here: 5.2 percent
Median individual earnings around 30: $38,900
This storied home of the Tuskegee Airmen also takes its students to unprecedented heights, with 28 percent of students going on into the top quintile among those with parents in the bottom quintile.

College: Dickinson State University
Became a One-Percenter: 0 percent
Started from the bottom now they’re here: 4.1 percent
Median individual earnings around 30: $40,700
The university began as a teachers college in 1918, however most students attending DSU are business management majors, and apparently it’s been doing a good job of preparing them for the business world as graduates consistently score in the top 10% of national exit exams.

College: Savannah State University
Became a One-Percenter: 0 percent
Started from the bottom now they’re here: 4 percent
Median individual earnings around 30: $29,400
Another HBCU, part of Savannah State University’s mission statement is “to graduate students who are prepared to perform at higher levels of economic productivity” — if they were to add “than their parents”, they’d have accomplished that mission.

College: Park University
Became a One-Percenter: 0 percent
Started from the bottom now they’re here: 3.9 percent
Median individual earnings around 30: $43,600
This Missouri school has exploded in size since offering online programs and was granted university status recently — but the famously military-friendly college was also ranked the seventh-most affordable private university/college in the nation.

A Quick Rundown on Pay Rates and Job Placement Ratings

No college can guarantee you a job — much less being “very well off financially” — but many still stake reputations on their alumni career success and employment rates.

Because of the importance of these numbers to prospective students, it can often be tough to tell who to trust with these numbers. While some institutions go to great length to ensure their numbers are as accurate as possible, not all are as diligent — or (let’s just say it) as honest.

Independently-obtained pay information and career info from resumes serves as a system of checks and balances for the universities themselves. And of course, we’re always here to steer you in the right direction — watch doggy-style — as well as the IES, or the Institute of Education Sciences, a bipartisan government organization dedicated to finding scientific data related to education.