Cough, Cough: More Than Half Of Workers Call In “Sick”

In need of a sick day?

You might be a bit under the weather, but maybe you’re not sick at all. Whether it’s a mental health day, a hangover, or even an interview for a new job, some days you just can’t be at work.

We surveyed 2,000 American workers to find the most common reasons people call in sick and how they go about playing hooky. Turns out, some states are fake coughing on the phone a lot more than others.

How many workers are calling in “sick” in each state?

Use the map below to discover the % of workers calling in “sick” in each state. 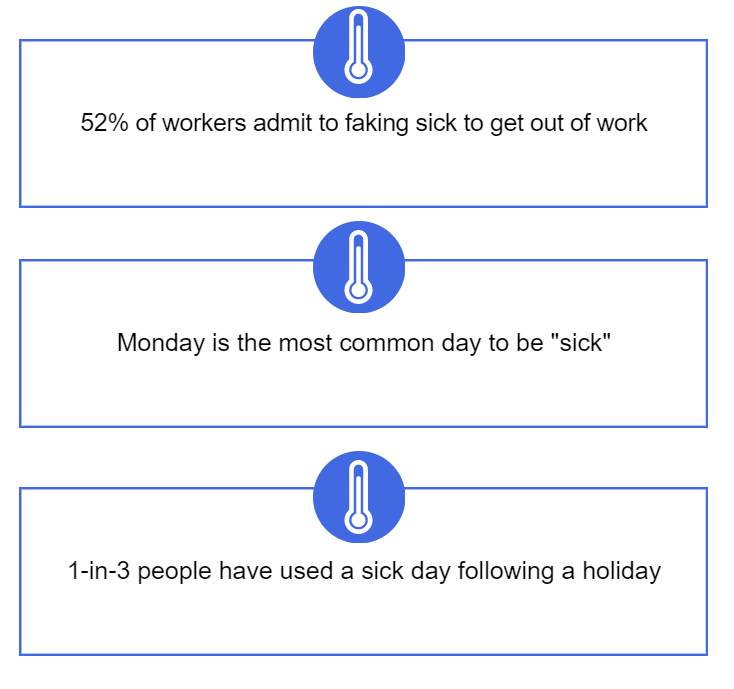 All The Reasons People Call In Sick

We asked workers to select all the reasons they call in sick. After all sick days are complex, you can call in sick with a fever one day, and then be hungover the next (probably not doctor recommended.)

We found the bulk of workers calling in sick are doing so because they are actually sick. Wild. Right behind that is workers taking a mental health day and then workers who don’t feel well but aren’t too sick to go in. A good chunk of workers said they’re just too tired. Seems pretty above board.

However, some workers are using their sick day to get over a hangover and do something funner than sitting at a desk. Another 11% of workers have used a sick day in the past to land their next job.

Of course, we wanted to be sure we didn’t miss anything, so asked workers for “other” reasons they’ve called in sick.

Other Reasons People Have Called In Sick

The most common 3 ‘other’ responses we received involved chronic pain/health conditions, childcare, and breakups/funerals.

However, we also received a decent sized chunk of people who call in sick or need a mental health day due to their job. One respondent summed up the feelings as, “I have called in sick to avoid working because my boss was abusive and the work place hostile. I actually feared going to work and at times couldn’t force myself to go.” Others described “stupid” bosses, needing breaks from office drama, and general work anxiety as a reason they call in sick.

Good news? Workplaces can reduce absenteeism by creating healthy work environments. Bad news? Those in charge of decision making are often the reason workers are skipping work in the first place. Awkward.

Zippia.com, a career resource website, conducted a study of 2,000 workers across the U.S. to learn more about why workers call in sick.

Go Ahead And Take A Sick Day, But Maybe Not Too Many

Most workers aren’t calling in sick for fun and giggles.

Many may not be running a fever, but are in dire need of a mental health day. Others have essential medical appointments or errands to run. Some are stuck at home due to transportation or childcare.

Sure, 13% of workers admit to nursing a hangover and another 14% are taking the day to do something fun, but most workers aren’t having a holiday.

Employers should strive to be understanding that humans have human issues that sometimes overlap with work. Hopefully, those burnt out workers will come back from their day of playing hooky refreshed and ready to work.

Employees shouldn’t beat themselves up when they are at their breaking point or when their kid has a stomach flu. However, if you find yourself continuously calling in sick to avoid the stresses of work, it can damage your image at work and potentially jeopardize your job. If you are the 24% of people who call in because you just don’t want to go to work, it may be time to find a new job that doesn’t have you dreading the work week.

The States That Play Hooky The Most