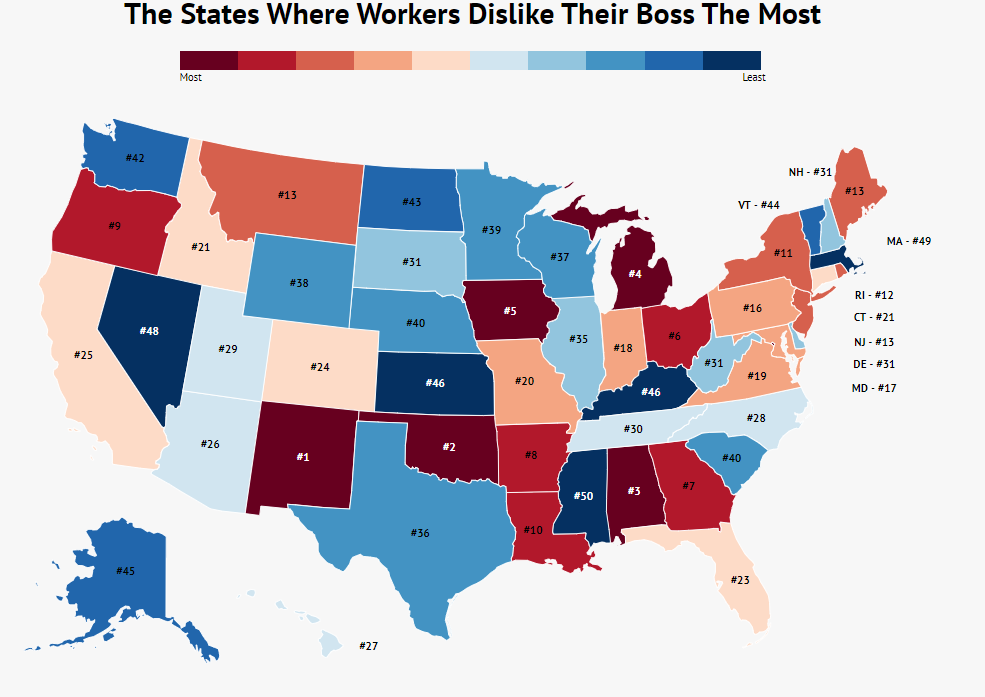 Is your boss the worst?

We surveyed 2,000 workers to learn more about toxic employee-boss relationships, including what behaviors make some bosses so disliked in the first place!

Keep reading to see what drives workers crazy and where in the country the most people have a dart-board with their boss’ face on it, or skip to the bottom to see the full ranked list. 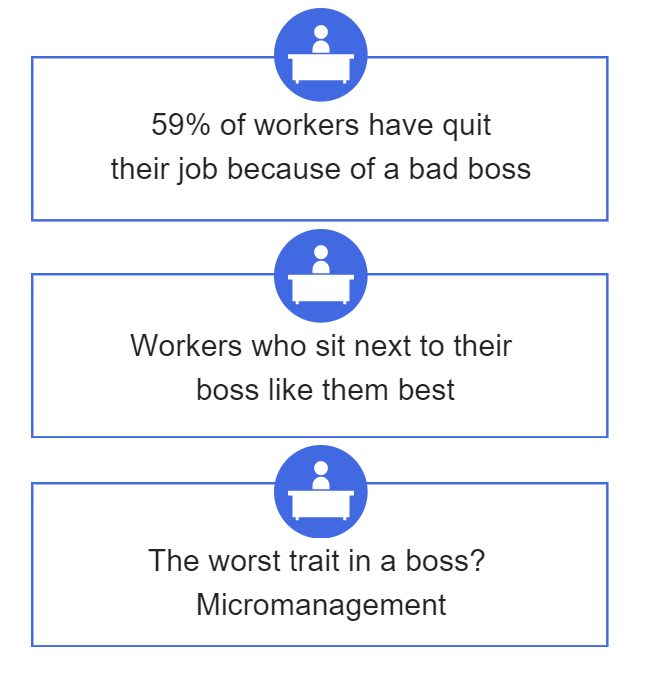 Why Do People Dislike Their Boss? 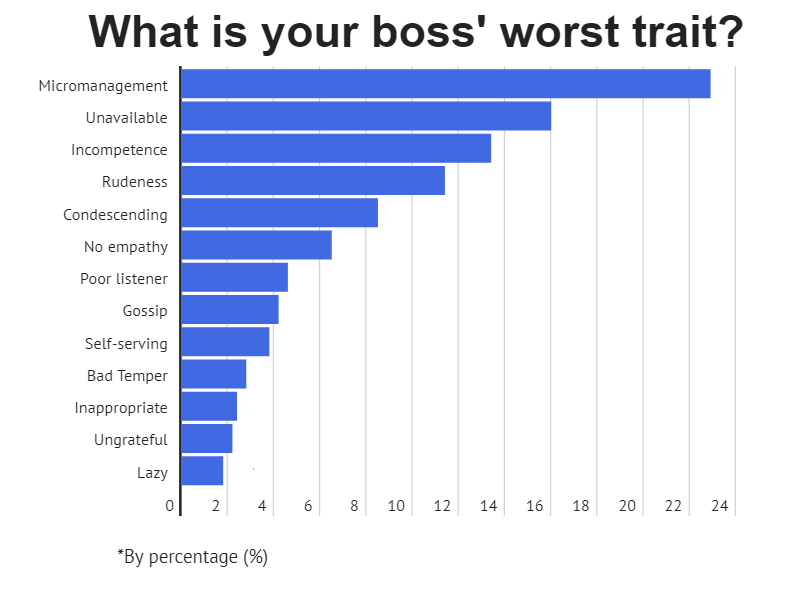 People’s #1 least favorite traits in a boss are micromanagement, unavailable, and incompetence. So, if you’re a boss wondering why your employees don’t like you… those are a pretty good place to start. In fact, you might want to do some soul searching about your management mistakes.

After all, if your employees are quitting because they can’t stand you, it’s a pretty big company expense and a lot of your time is probably spent replacing those pesky employees who hate you.

What other common reasons did people mention for disliking (or hating…) their boss?

Well, don’t be too nice. Or to not nice. Or too present, or too unavailable. Seems simple enough? Right?

Of course, those are just the other common reasons. We left off some pretty out there reasons such as “too much perfume”, “attacked with shopping cart”, “manslaughter (!!!)”, “sat on my boyfriend’s lap”, and “captured a rat at work and brought it home.” Or at least we think these aren’t common reasons.

What Grinds Each State’s Gears The Most 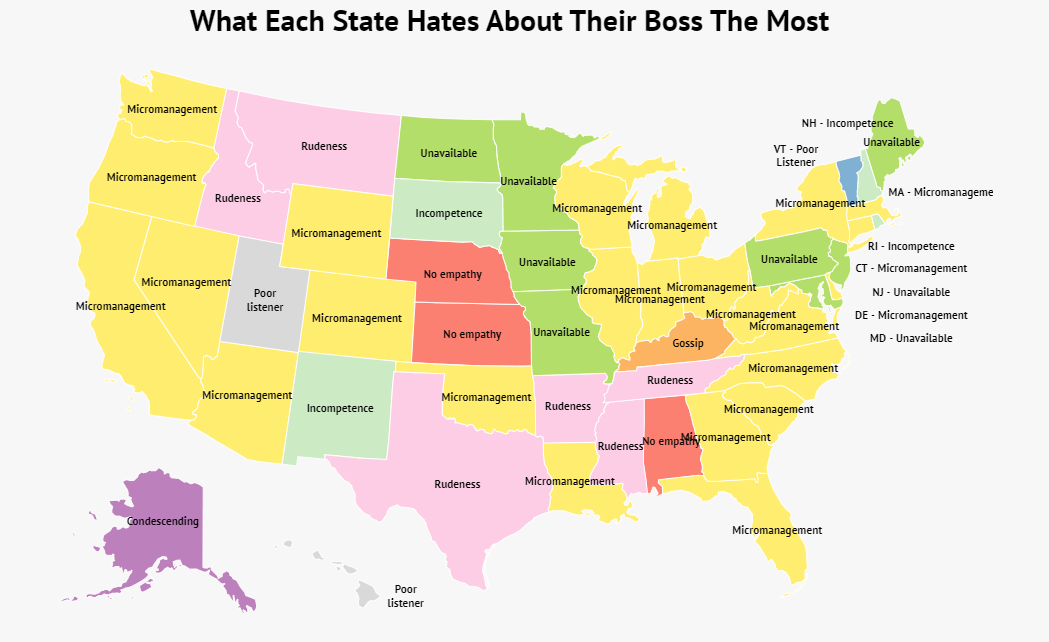 We tallied up all the reasons people dislike their bosses (not just the #1 reason like above.) Over 24 states say their boss’ worst trait is micromanagement. Another 8 hate how unavailable their boss is. Maybe they can swap?

Of course, some states are outliers. Kentucky’s biggest management problem is bosses who love to gossip. And down in Arkansas people hate their condescending bosses. Other bad traits that states hate the most? Rudeness, incompetence, and lack of empathy. 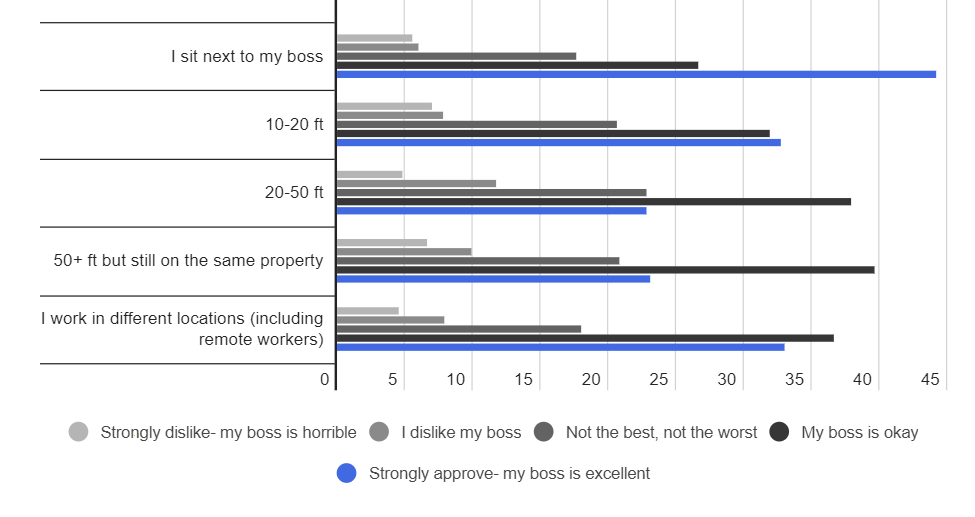 Absence doesn’t always make the heart grow fonder. At least not of your boss.

The people most likely to answer “My boss is excellent” sit next to their boss. Maybe the sharing of snacks, tidbits about your weekend, and all that face-to-face communication pays of. With the increase in people working remotely, this might have some worried they are losing synergy. However, it is worth noting, that while remote workers don’t love their bosses as much, they are the least likely to “strongly dislike” their employees.

The numbers level a bit after that. And the vast majority of workers “like” their boss or ambivalent towards them if not best friends. Is that so terrible?

Zippia.com, a career resource website, conducted a study of 2,000 workers across the U.S. to learn more about employee and boss interactions.

Is Your Boss The Worst?

You can see the full ranked list of the amount of people in each state who think their boss is pretty crummy. Of course, there is some optimism in this story, because while most people have left a job due to a bad boss, most people don’t hate their current boss.

Hopefully you personally have a satisfactory, professional relationship with your boss. For better or worse, you spend eight hours a day in the same world as them. A bad boss can make 8 hours seem like eighty. While some of the reasons people said they disliked their boss were mild (cheesy jokes, too much perfume), others were profoundly serious (harassment, prejudice, and other toxic, degrading behaviors).

Every worker deserves a safe, welcoming environment. If your boss is in anyway violating or creating an uncomfortable environment, you should follow whatever channels are available to you, including HR intervention.

Of course, if you’re just over the Chanel No 5. and the dad jokes, it may be time to find a new job (and boss!) that’s more to your liking.