The Most Googled Jobs of the Last 5 Years

by Ryan Morris
Jobs - 3 years ago 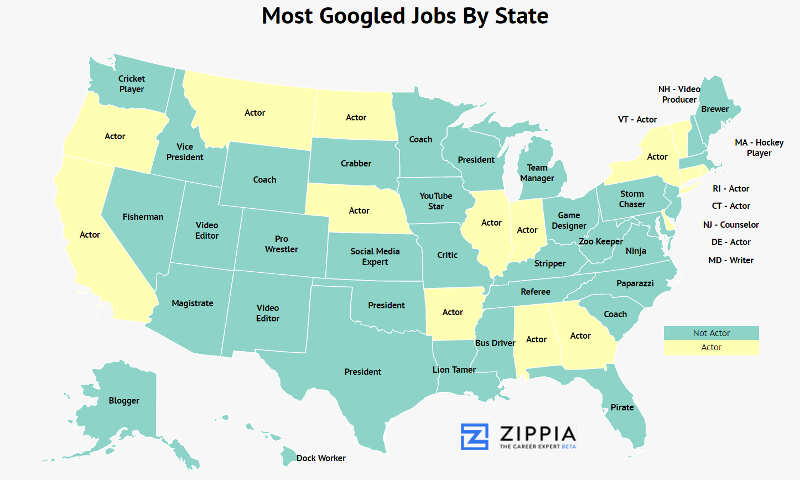 Are you on the job hunt? Looking for local jobs or just taking what you can find?

You might think that a person’s skills and education has a lot to do with what sort of positions they might be looking for on the internet, and you’d be correct. But there’s another indicator you may not have considered: the state you live in.

Have you ever wondered what jobs other people in your state Google more than any other?

We certainly did. So we put together a map of some of the jobs that people search for more than any other, separated by each state.

Bloggers are all the rage in Alaska, for example. People in North Carolina search for Paparazzi jobs, which makes sense, given the sheer amount of celebrities flocking to the Old North State.

Meanwhile, in the Square States, Coloradoans are searching for Pro Wrestlers, Kansas for Social Media Experts, and South Dakotans pine for the sea-faring life of a Crabber.

But most of all, people are searching for Actors — whether they’re trying to become one or just looking up the filmography section of Sam Waterston’s Wikipedia page (did you know he was in The Great Gatsby??), the job that Americans search for overwhelmingly is that of the humble thespian.

Google offers a tool called Google Trends that lets you input a search term and see how popular that term is relative to other places.

For example, search for Brewer and click on the map of the US to see that Maine searches for that term more than any other state.

So all we had to do was put several hundred search queries into Google Trends to find ones that were searched more in, say, Texas than any other state. We used the last five years as the parameters for our search and, like magic, the map above was born.

Weâve listed the winner for each state below, along with a few other options that we didn’t go with. Actor was overwhelmingly the winner of almost every state, and in fact won a few more states than are even shown on the map — as a result, we switched out Actor with the closest runner-up in most of the affected states, unless there was no runner-up or unless the runner-up was too far below actor to be reasonably chosen.