The Weirdest Things People Actually Put On Their Resumes 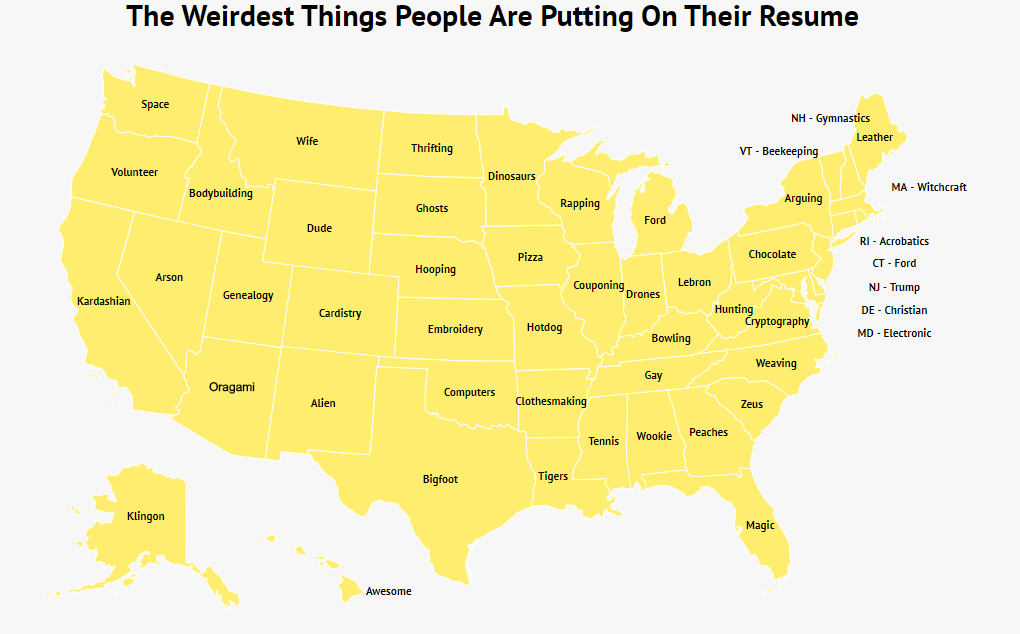 Nothing fills a job hunter with more dread than that pesky “Additional Interests” section on their resume.

Even worse, the company may have specifically requested your hobbies and mentioned wanting to find a “culture fit.” You’ll hem and haw, and scramble before putting down some interests you’re hoping will intrigue the hiring manager.

Make them see, You have interests! You’re creative! You help others! You’ll make great water cooler banter! Or at least not make them go, “Wow, don’t call this guy.”

It made us wonder– what weird, uncommon terms are people choosing (sometimes poorly) to put on their resume? We analyzed 3,543,017 resumes from people just like you to see the most unexpected adjectives, nouns, and hobbies people are using on their resumes.

What we found was weird, to put it simply. And in today’s map, we’re showing you just how weird each state really is.

You can keep reading to see how we found this gems, and some context for the more bizarre resume mentions.

We gathered up the most disproportionately common interests found on people’s resumes in each state across the country, by analyzing a veritable boatload of resumes. 3,543,017 to be exact. We then looked at which keywords appeared in people’s additional interests the most across the country. Then we made a nifty map, because, maps are fun.

In the next section, we take a look at some examples from real resumes. Because stuff like “Kardashians” needs some explanation.

The fact that Kardashians was even mentioned once in about 100K resumes is astonishing. Guys–don’t put Kardashian in your resume. No matter what.

In this case, here was the context: “-One of less than 15 companies included in several backstage Swag/Celebrity events such as MTV, BET, The GRAMMY’s, Emmy Awards, and Steve Harvey Neighborhood Awards for 8 years in a row. -Designed and worked for many TV networks and celebrities such as The Kardashians, Beyonce Knowles Carter, Paris Hilton, and other industry favorites”

So, sure, it makes sense. But really–do you want to be bragging about your affiliation with the Kardashians?

“UFO” was a term most likely to be found in Alaskan resumes. Sadly, it appears users aren’t explaining their believe but something it out there, but describing former job duties. Alas. Here’s an example: “Familiar with many different satellite types including DSCS, MILSTAR, UFO, Intel Sat, and Pan Am Sat.”

You can’t just stick that in there and then keep going like you didn’t! WHAT IS HAPPENING!

“Redneck” is another resume keyword that came up a surprising amount (not enough to be the most mentioned in any state, but still). Here’s an example of why this actually does make sense:

“Interacted with festival attendees, helping them find their way around the festival as well as helping them sign up for the National Taco Association Arizona Barbecue Festival Oversaw and maintained order of the horseshoe toss in the Redneck Arena”

class="fancy">The Moral of This Story…

If a company requests additional interests, you might want to settle on ones that you wouldn’t be ashamed to tell your mom- or highlight additional skills you may not have a chance to convey in your professional experience, such as volunteer work.

Of course, while you are free to mention religion, race, disabilities, and political affiliation, you are protected by law from disclosing these qualities.